All of our adult classes are open to both men and women. We offer both beginner & advanced classes in our weekly schedule. Beginner classes are available daily! All ages and fitness levels are encouraged to come.
Kids' classes are for ages 7-13.

Mixed Martial Arts fighting combines the best of all fighting philosophies in order to develop what works best. MMA takes the successful & effective techniques from different martial arts all over the world: Muay Thai/Kickboxing, Jiu-Jitsu, Wrestling, etc., & combines them to develop a style of fighting or self-defense that effectively suits you.

A common misconception is that you will be showing up at the gym to get beat up every day. You're going to be partnered with people of your level, so you can learn and grow. You can go at whatever pace is comfortable for you.

You do not have to be competitive. Classes include a great mixture of people: those who are training just to get a good workout and those who want to fight in competitions.

EGOS ARE NOT WELCOME! We provide a fun, supportive, encouraging environment that is clean and safe.

Overall, MMA is a fun way for people to get in great shape, learn how to defend themselves, and form a bond with friends. Training is a good way to not only become a better athlete, but a better person. Our team is fully invested in helping you reach your goals & making your dreams a reality. 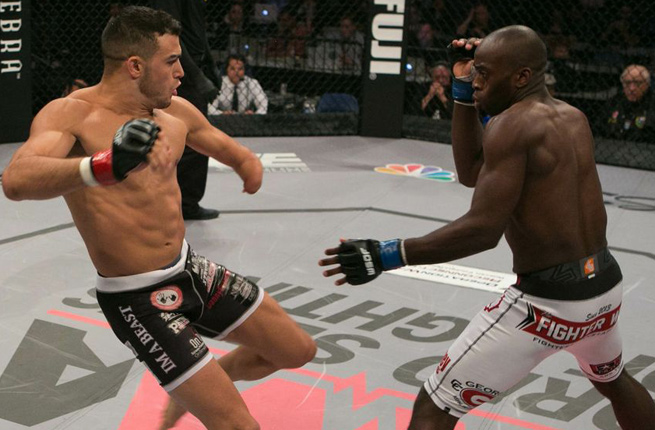 BJJ (Brazilian Jiu-Jitsu) is about efficiency. The premise of Brazilian Jiu-Jitsu is that a smaller, weaker person can defeat a stronger and larger opponent. It’s about learning how to use your body in the best possible way through leverage and proper technique. BJJ emphasizes ground fighting techniques and submission holds involving joint locks and choke holds.

Once the opponent is on the ground, a number of maneuvers (and counter-maneuvers) are used to manipulate the opponent into suitable position for the application of a submission hold. We apply heavy emphasis on positional strategy, live rolling, and drills to help with your submissions and techniques.

No matter what your skill level is, you’ll get just what you need from these classes. Everyone is supportive and dedicated to keeping the team atmosphere alive. We guarantee you’ll fit right in and have a blast!

Muay-Thai makes use of four of the body’s weapons: legs, knees, elbows and fists. Muay Thai kickboxing is a fighting art that originated in Thailand & has been practiced & perfected over the last 2000 years. Muay Thai is the perfect stand up striking class that provides the student with the tools they need for the ring, even though most students will never fight. Techniques taught are learned quickly and are easily integrated into daily life. Classes will involve the use of shadowboxing, footwork skills, pad work, heavy bag training, and various partner coordination drills.

This system provides stress relief, strength, cardiovascular fitness, self-defense and it is extremely fun. Prepare to sweat and burn some serious calories, while learning the most complete and powerful striking self-defense system using every part of your body as a weapon.

Great for beginners to advanced students.

*Hand wraps and boxing gloves are required for these classes.

If you are looking to get in the best shape of your life while having a blast, then come have an experience of a lifetime challenging yourself to our Kickboxing Fitness classes.

We combine cardio, resistance, and interval training to give you the best fat burning workout possible. Men & Women absolutely love our kickboxing fitness classes because it’s real kickboxing! It gives you an intense cardio workout and helps you burn fat while teaching real techniques. Nothing melts the stress and fat away better than a few rounds on the bag or pads.

*Hand wraps and boxing gloves are required for these classes — and are available in house.

The term "kickboxing" can be used in a narrow and in a wide sense. The narrow use is restricted to the styles that self-identify as kickboxing. In the wider sense, it includes all stand-up combat sports that allow both punching and kicking, including Savate, Muay Thai, Indian boxing, Burmese boxing, Sanda, and certain styles of Karate (especially full contact karate).

The oldest sport known to man, wrestling is one the original sports of the Olympic games. Wrestling involves techniques such as take downs, clinch fighting and throws to gain and maintain superior positions.

Students enrolled will receive instruction in all areas of wrestling, including attacking from the neutral position, counters and how to set up take downs. From top and bottom position, wrestlers will learn breakdowns, escapes, counters, and a variety of pinning combinations.

Students will gain knowledge of various wrestling techniques, wrestling strategies, how to drill, goal setting, mental toughness, and increased confidence on and off the mat.

Wrestling is a combat sport involving grappling type techniques such as clinch fighting, throws and takedowns, joint locks, pins and other grappling holds. A wrestling bout is a physical competition, between two (occasionally more) competitors or sparring partners, who attempt to gain and maintain a superior position. There are a wide range of styles with varying rules with both traditional historic and modern styles. Wrestling techniques have been incorporated into other martial arts as well as military hand-to-hand combat systems.

Not only do we teach kids self-defense, we give them the tools they need for success in life! Discipline, self-confidence, respect, integrity, teamwork and responsibility are some of the core principles your kids will learn from our program. Martial Arts are seen as a means to individual development, and our Kids Program emphasizes development of these important life skills.

We will teach your child to set goals and accomplish them. The more and more they attend classes, the more ambitious they will become. We teach a complete self-defense system that will give children a high degree of self-confidence. We instill positive social values such as respect, honesty, humility and dignity. We teach children how to intelligently cope with bullying and peer pressure. We integrate sport and self-defense techniques with conditioning and skill oriented games aimed at improving your child’s coordination, motor skills, agility and flexibility. You will notice an increase in their energy, alertness, and overall happiness.

Martial arts is great for improving focus in children. Involvement in Martial arts are highly beneficial to kids with ADD/ADHD (http://www.additudemag.com/adhd/article/8397.html), helping them focus through exercise and interaction.

During this hour-long class they will be instructed and supervised by our Certified Black Belt instructors, who have many years of training and teaching experience under their belt. Their self-confidence will soar as they progress through our martial arts system.